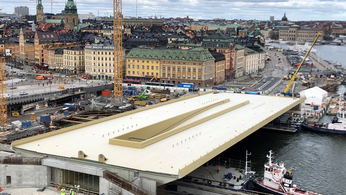 The Slussen of today was built to solve the traffic problems of its time and cars were the focus of the area´s planning in the 1930s. Hundreds of thousands of people pass through Slussen on a daily basis, but few chooses to stop here. Now Slussen is rebuilt as a place where everyone will be interested in stopping to enjoy the new spaces and facilities.

End of 2020 it was inaugurated  after it was treated with our product in China by order of Skanska.

Read here about the process:

In Shanhaiguan, the panels have been cut and the machine welded. In Zhongshan, the various parts have been mounted: first to 72 sections, then to eight segments that have been painted five times. Finally, the entire 140 meter long and 45 meter wide bridge has been assembled. In the port of Zhongshan, the entire bridge was lifted to two pontoons with the help of two traverse cranes that take 2000 tonnes each.

The pontoons with the bridge were floated onto a submersible ship, a so-called semi-submersible transport ship, which transported the entire bridge over the sea to Stockholm. The method of loading and unloading by lowering the vessel itself has been developed for the offshore industry's need to transport large oil platforms. It makes it possible to handle very large loads. Building and transporting the bridge in one piece offers several advantages. You do not have to reload the bridge to a launch barge in Stockholm, and the quality becomes higher when the jointing of the different parts can be done under optimal conditions protected in a workshop.